DAST vs. SAST vs. IAST - Modern SSLDC Guide - Part I


Using a variety of vulnerability detection solutions have become widespread in software development projects, with the aim of detecting crucial vulnerabilities as early as possible.

The vast collection of technologies and tool-sets available to address the issue can dazzle even an expert, raising questions such as -


The engimous "Which technology is the best ?"

The intriguing "Do DAST/SAST/IAST complement or supersede each other ?"

And the inevitable "How to prioritize their usage and acquisition ?"

With the upcoming publication of the WAVSEP 2017 benchmark close at hand, I wanted to take the opportunity to provide my take on the role of DAST tools within the  context of prominent technologies and trends in the field.

Where do they fit in? What do they excel in (compared to alternatives)? When should we use them?

With the introduction and maturity of new vulnerability-detection technologies (IAST/DAST/SAST/HYBRID/OSS), and the expected streamline of (understandably) conflicting vendor claims, users may find it hard to discern which technologies may fit their needs, how to PRIORITISE their acquisition/integration, and when’s the right time to engage each solution category.

In the following article, I will be covering a few of the key aspects in the integration of these toolsets into an SSDLC (secure software development life cycle) environment – the OVERALL EFFORT and the IDEAL TIMING of each solution category, and the benefit of SUPPORTED TECHNOLOGIES and CODE COVERAGE they provide under different cirucmstances.

In addition to being exposed to a wide variaty of tools-of-the-trade, the article can also help the reader answer some basic questions when evaluating any one of these tools.

For those of us who somehow managed to escape the terms currently in use – this article covers the following technologies:

1) DAST – Dynamic Application Security Testing – Generic and Known Web Application Vulnerability Scanners that analyze a live application instance for security vulnerabilities. To further clarify – this is the category of tools that was covered in all the previous WAVSEP benchmarks.

3) IAST – Interactive Application Security Testing – Generic and Known Application Vulnerability Debug/Memory Level Analysis Solutions that attempt to identify vulnerabilities on live application instances while also analyzing code structures in the memory and tracking the input flow throughout the application sections. This category is further divided into the following subcategories:

4) OSS - Open Source Security – the SAST equivalent of the mythological CGI-scanner – these solutions that were, for the purposes of this article, integrated into the category of SAST, due to similarity of the chart positioning and role, although these solutions operate in an entirely different manner, and focus only on the identification of “known” vulnerabilities in 3rd party libraries.

*) The various aspects of hybrid analysis tools are NOT covered in the various article sections and charts, and the same goes for network vulnerability scanners with application level features but without SSDLC adaptation, or cloud security solutions without SSDLC integrations.

So Which Solution Category Is Most Important in SSDLC?

The most obvious differentiation between the various scanning solution categories is the amount of supported technologies - as in - which development languages are supported.

After comparing the various official and unoffical supported technologies proclaimed at the various vendor data-sheets, we'll quickly get to the following conclusion: 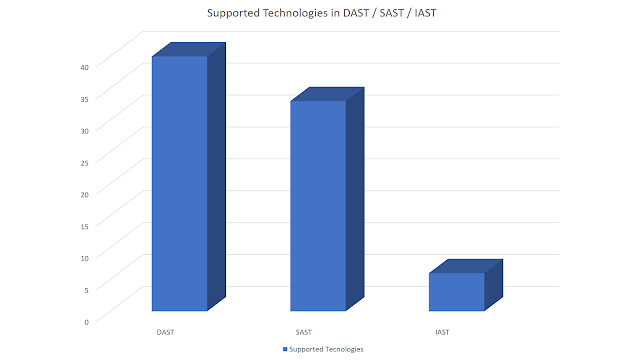 The charts and tables signify the result of high end DAST/SAST/IAST in the industry, and obviously, some SAST and IAST solutions may support a much lower subset of technologies than the listed scope. Comparing the support for scanning non-web application variants (custom non-HTTP-based protocols) will drastically affect the chart as well.

It is also important to mention that DAST/Active IAST solutions in automated modes also need to be able to "crawl" the technology, or at the very least support the creation of recorded "sessions" of a manual crawling process, and also support sending attack payloads through the "input delivery vectors" used by the application (e.g. query-string / body / JSON/ XML / AMF / etc).

Although SAST / Passive IAST solutions also need to support "tracking" the input delivery vectors, they could, theoretically, identify hazardous code patterns without tracking the entire input-output flow, with the price of potential false positives being reported.

The difference in technology support in IAST solutions is partially related to the fact that IAST implementations are relatively new compared to DAST or SAST implementations, but also to the amount of effort required to "integrate" the IAST engine to each new technology, and furthermore, to maintain the implementation with the release of newer versions of the same supported technologies (adaptations may be required for major java JVM versions, newer .net framework versions, etc).

So, although this technology-support "GAP" may be smaller over time, the effort that will be required to maintain technology support will grow at a bigger pace, at least when compared to the pace of DAST and SAST technology compliance.

It is however, worth mentioning that most IAST vendors focus on widely used technologies that would cover as much ground as possible (Java / .Net / PHP / Node.js), and thus the actual importance of this "gap" will greatly vary for some organizations, and may even be insignificant for some.

And what of coverage ?

As it appears, being able to "support" a technology, does not necessarily allow the testing tool to automatically cover the larger portion of it's scope, which in turn, may dramatically affect the results.

The type of technologies evaluated, the method of evaluation, the code deployment format, and even the "legal" ownership of the source code libraries may affect the actual sections being covered by the tool.

The coverage criteria will be easier to understand in the form of a table, rather than a chart:


Conclusion:
DAST and SAST tools *typically* support more technologies, and as far as coverage is concerned -

Throughout the development process, in both the early and later stages, the amount of effort invested in detecting vulnerabilities can, knowingly or not, play a key role in the success of the SSDLC process.

For every vulnerability detection solution and for every scenario, resources are required to integrate the chosen solutions, maintain the integration (not as easy as it sounds), and go over the results to filter high-impact and relevant issues.

Since for all the phases there’s a limited amount of human and IT resources, overly complex integrations can DELAY (or sometimes even PREVENT) the detection of security issues to a point that the benefit of detecting them early won’t apply, while complex and tedious result analysis processes can easily cause the developers to ignore identified critical issues due the sheer number of irrelevant results.

The overall effort of using each tool, is not always properly estimated by potential consumers, and for various tool categories, is focused on different areas.

Although the most obvious effort seems to be the initial integration of the vulnerability scanning process (for live instances, code, or combination thereof), the process of verifying which of the results is REAL and EXPLOITABLE, to justify mitigation effort, may be just as tedious and even more time consuming.

To put the upcoming results into proper perspective, it's crucial to understand that the relative ratio presented in the various charts is exactly that - relative, and that in fact - most modern solutions are FAR BETTER in terms of accuracy then previous generations of tools (early DAST / early SAST / fuzzers / parsers). To further emphasize the perspective, assume the accuracy of modern tools falls in the following context when compared to that of previous generation tools: 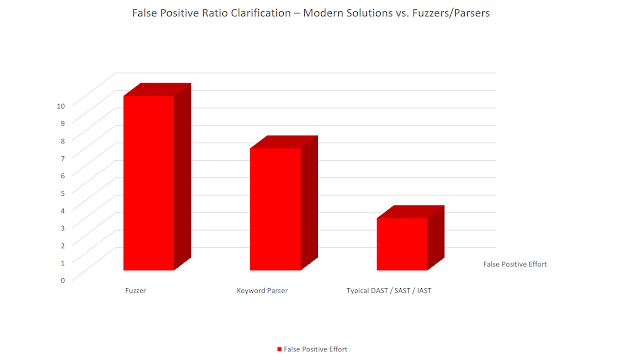 And now, when the relative scale has been clarified, we can begin to compare modern technologies against each other.

Ease of Integration and Maintenance

Integrating a vulnerability detection solution may require different steps, depending on the complexity of the application being assessed.

The requirements will often include defining the scope of the test, providing necessary scan data (credentials / etc), configuring a scan policy, deploying an agent, etc.

To simplify the analysis of the data, we will present the integration / maintenance requirements in charts describing two main scenarios:
1) A typical scan of an unauthenticated OR common application with FORM/HTTP authentication,
2) A scan of a (relatively) complex application, with micro-service architecture, scan barriers (anti-CSRF mechanisms, multi-phase processes, etc), or similar complex prerequisites: 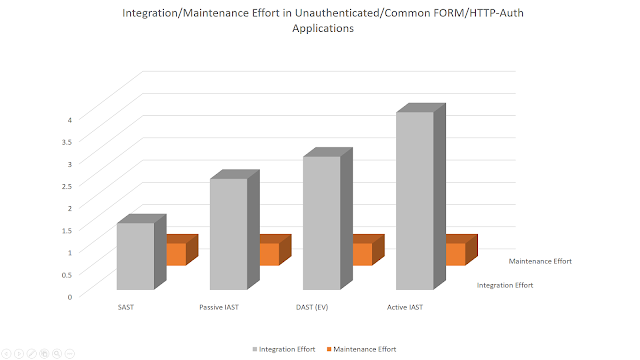 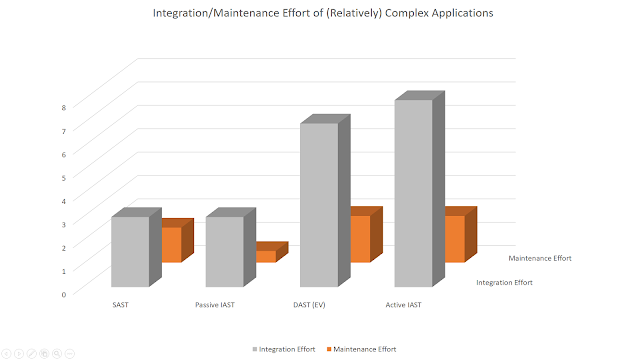 From the point of view of integration, some tools are easier to integrate than others, some have very little or no effort required for maintenance, and some require a specific scan policy in order to maximize the result efficiency.

To summarize the topic  :
Or in short, SAST solutions are probably easier to integrate, DAST and Passive IAST compete in terms of ease of integration, and Active IAST typically requires more effort to integrate than other solution categories (but provides adequately accurate results, as seen in the next section)

Effort of Weeding Out False Positives


The relative ratio of false positives derives from a number of methods that can be used by each technology to verify that identified vulnerabilities are not false positives, in addition to the individual solution efficiency: 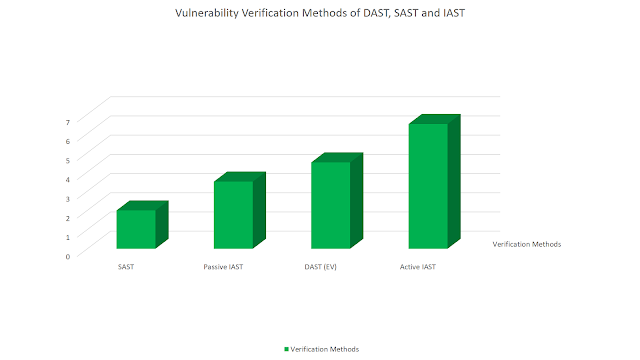 Additional importance is given to the information the various tools provide to a HUMAN trying to discern the relevance of the issues reported, and tool-set (if any) provided to "reproduce" or manually "verify" the identified security issues.

Furthermore, the false positive factor will become EVER MORE IMPORTANT with the increase in volume of scanned applications. Weeding out false positive from actual issues will require time and effort from a security expert, and any misinterpretations will cost even more for developers to mitigate.

To complete the picture for the various technologies, let's present the RELATIVE integration/maintenance effort vs. the *typical* false-positive effort required to identify actual issues throughout the analysis cycle: 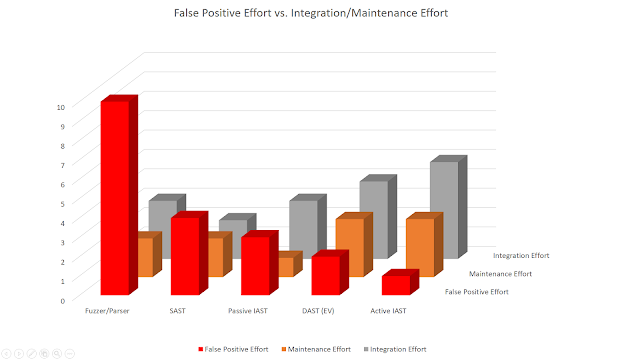 So there you have it, technology and coverage, integration and false positive ratio for various *typical* modern technologies, pitted against each other.

And if the choice still seems complicated, that's ok, it's because it is.

And what of other aspects ?
The ability to detect common and exotic issues, the performance scale, the RISKS applied to using each technology in different environments, and the overall recommendation ?